Q&A - What it's like to join the world of tech! 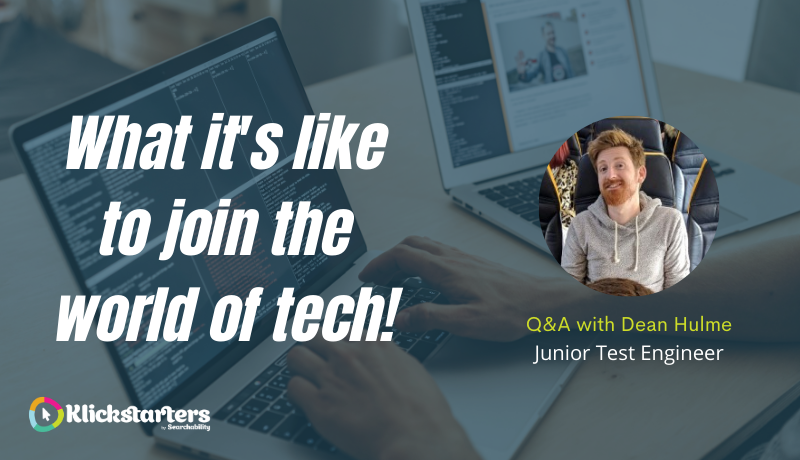 Starting out in your first role in the tech industry can be difficult knowing where to start. We sat down with Dean Hulme who was in the building industry working as as Contract Manager. Dean found his love for testing after attending events and freelancing. Now he enjoys working as a Junior Test Engineer at Missguided! Here's what we found out..

1. At Klickstarters we are helping candidates who are looking for their first job in tech to secure a position with great employers. I can see from your LinkedIn that you actually worked outside of the tech world for a few years before making the jump to software testing, what drove you towards this change?

I’d spent the bulk of my working career establishing and maintaining a couple of family businesses, as far removed from the tech industry as you can imagine. When it came to a point where I was able to leave them I mentioned to a friend that I was looking at a career change. As luck would have it, this friend was a Software Tester and highlighted that my approach to tasks would translate well to software testing.

I kept the idea on the back burner for around a year before I began attending a couple of tech/testing events out of curiosity and was really impressed with how the community seemed to be full of people that were keen to develop themselves and others, sharing their knowledge and experiences. I was really sold on an industry where I could continue to learn new things and be rewarded for the effort I'd likely put in.

2. You've clearly have a passion for technology for a number of years we can see that you gained a Foundation degree in Computer Games and Programming Skills in 2009, did you find this experience benefitted your job search?

Honestly, no. The knowledge I gained on the course was long forgotten and the tech industry moves so fast that it was seen as practically redundant. What it did do though was act as a conversation topic during interviews/applications. I’d freely admit that I had experience limitations but it highlighted a long standing interest in the tech industry.

3. Prior to joining Missguided as a Junior Test Engineer you also gained experience as a freelance tester, did you find this additional hands-on experience helped you stand out in your job application?

100%. Experience became the bane of all applications. I spent a long time trying to figure out how I could bridge that gap and freelance testing absolutely did that. I was able to gain experience in following test cases, writing bug reports and honing my skills in exploratory testing (a really undervalued skill!). Additionally, it’s a great way of showcasing to potential employers that you’re serious about the industry that you’re looking to get in to.

4. Technical job interviews can sometimes vary from other industries, from your experience did anything stand out that differed from past experiences? (e.g. technical tests, people interviewing, speed of process etc.)

As I’d been self-employed for a long time the whole interview process was relatively new to me in general! I sent a ton of applications and had too many interviews to count before I started getting job offers. But I felt with each one I gained a bit more understanding of the process and what information I needed to convey during them.

A lot of the Junior level interviews tended to use quick technical tests as a means of starting the interview. These are generally paper based, ‘How would you QA/solve this….’ scenarios and are definitely worth preparing for. It’s a golden opportunity to demonstrate all that theory that you’ve been learning which wouldn’t organically come up during the interview questions.

5. You’ve been in your current role for over a year now, how would you describe your first year as a Junior Test Engineer?

It’s been manic! But I’ve loved it. I consider myself really fortunate to have joined an industry that has huge scope for development and to join a company, like Missguided, that are really keen on improving their own processes within tech, developing their staff and have been happy to put their trust in me to work on a ton of different projects. Absolutely no sign of those Sunday Scaries, really looking forward to the next year!

6. With tech we know that the wider community can play a big part in supporting people’s professional development whether that’s through sharing insights or networking at events. Are there any groups / MeetUps / channels you would recommend checking out for other testing professionals?

If there’s one thing you should be doing when looking to get in to the tech industry it’s getting involved in the communities available. Personally they gave me; a means of confirming that I wanted to work in the industry, a chance to build my network (which ultimately led to my current role), an introduction in to key testing concepts, a means of structuring my own learning/development and confidence to apply for roles (after hearing the journeys of others who transitioned to a career in tech). Shout outs to:

7. Do you have any words of wisdom to candidates looking to make a career change to join the world of tech?

You’re going to have to put in a lot of effort to get your first role but there’s also a lot of people out there willing to help. If you’re fortunate enough to know someone in the industry see if they can help you put together a roadmap of skills/theory you should be learning. If you don’t know anyone then get to MeetUp groups. And when, six months down the line, you’re cruising in your first role, pay it forward.

Start my career searchAdvertise a job
A proud